It was the Microprose Era.

For an old gamer like me, Microprose was synonymous of top-notch simulation, huge manuals, big and beautiful box (carton box, not that plastic Dvd box): the final result was sensation to-be-there, in the cockpit. It creates a world worth to live, a world worth… flying even if it was all between your mind, eyes and screen.

In 1998, when Microprose released Falcon 4.0, it was the definitive F-16 simulation. I think, THE simulation. Even if it was very bugged, I never regret any minute spent playing…er…flying.

Falcon’s web community became the reference for every Falcon orphaned pilot and released a lot of mods. I say “pilot” because to master that simulation, you have to have to study manuals, procedures, maps. Maybe someone think this is a game and I don’t want to study anything, but – let me assume the odd teacher’s role – studying the manual (huge one) adds deep in gameplay and gives real satisfaction.

In 2005, Graphism Entertainment released Falcon 4.0 Allied Force, developed by Lead Pursuit. Falcon strikes back! Falcon 4.0 Allied Force has its roots in the original Falcon 4.0, but it adds improvements to a lot of simulation’s main aspects: stability (the first real problem in the original version), artificial intelligence, dynamic campaign , multiplayer. It also improved some other aspects as the user interface, graphics, campaign theatre (It adds the Balkan Campaign). 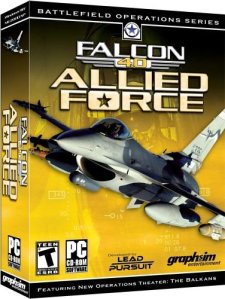 The retail box (not a dvd one, God bless Graphism Entertainment!) contains a 110-page printed manual, that covers most important features of the F-16 and is a good start for new players. The original Falcon 4.0 manual was far better, but for the hardcore (and swot) simmers there is a 716-page PDF manual included in the CD game. This manual is very accurate, contains a lot of color images and is worth printing. Maybe expensive but if you have a minimal interest in flying and aircraft, do you a favor: print it.

Installing original Falcon 4.0, complete with various patches released officially (v. 1.08US) and by the community, is really complex. Now it’s all gone: one standard installer. Few clicks and you are ready to fly.

The Intro sequence is changed and it is a good video footage of a real F-16. I still prefer the original one but it may be nostalgia. The user interface is clear and functional: a good improvement of the original one, inspired to previous community mods.

Now it’s time to take off. First thing you notice is the graphics and I’m happy to say that there is a lot of improvements in several aspects:

Sound isn’t so enhanced as the graphics, it seems all the same the original version. Actually I heard F-16’s engine roaring during Air Shows and – trust me – everyone in and near your home will blame you  the very moment you boot Falcon Allied Force on your PC.

The campaign is immersive: you feel to be part of a more complex operation and you can actually contribute to the final victory, succeeding in your own mission. It’s not one-against-all like ordinary story in ordinary videogame. Falcon doesn’t require an hero, but a good and disciplined pilot.

Multiplayer game is well implemented over LAN or Internet as you can participate in cooperative or adversarial multiplayer flight. Over 20 aircrafts can join in multiplayer games, some of which are AI controlled, others under human control.

In conclusion, this new release is a good enhancement and a solid product on its own. If you have only a little interest in jetfighter simulation and modern air warfare, there’s really no choice: buy it and…watch your six, ALWAYS!

In the Shadow of the Sun

Ori and the Blind Forest

The Ultimate History of Videogames

Florence and the Machine: Cerimonials

Florence and The Machine – Lungs

Raised by The Pixels Wars